Krems is a twin city: Stein, the place where the toll was collected and Krems, the market town. It was a trading hub.

Currently, it has 26,000 permanent inhabitants. It boasts of 3 private universities and an additional 10,000-12,000 students who take their further studies in Krems.

Krems also features the second biggest commercial port in Austria. It is only 45 minutes away from Vienna by train.

Today, we will have a monastery tour and wine tasting.

Abbeys own large territories after receiving land and donations over the last thousand of years. Austria is called the Land of Monasteries given its predominantly Catholic roots.

The pope has a dispute to decide who is bishop. The emperor wanted to decide given they have worldly jurisdictional power. This investiture controversy almost brought upon a civil war. So they settled from Germany to Austria so Austria became a place of refuge so many monasteries were made here.

In the 16th century, Protestantism was on the rise in Austria. Because of this, the Hapsburg family launched the Re-Reformation to make the country back to Catholicism. As a result, 4,000 monasteries was built from Franciscan to Benedictines and such.

Joseph the Second closed up to 2/3 of the monasteries, leaving a few monasteries that became even more powerful than before.

A lot of big businesses set up in Krems. For example, there’s Benda-Lutz that specializes in paint and aluminum pignents which are used for painting 70% of cars.

We arrived in the Herzogenburg Monastery.

The monastery follows the rules of St. Agustines. There are 16 monks, 5 of which live outside the monastery and inside their respective parishes. 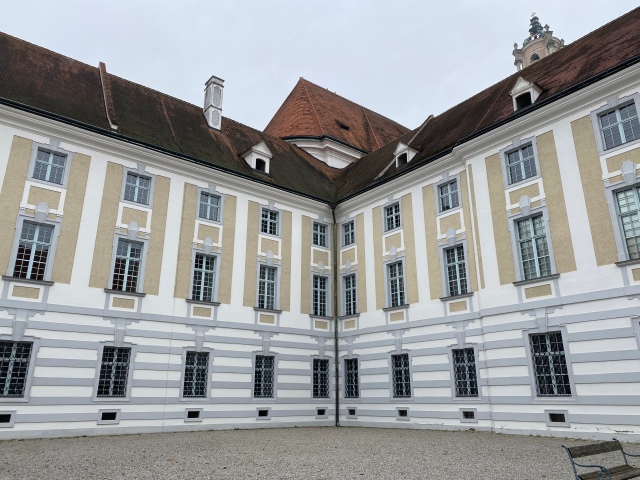 This courtyard mooks weird because it’s unfinished due to the cost.

This church is older than the monastery. The style is Romanesque but reshaped to Baroque style. This church is at the very end of the Baroque era. Everything is more floral, delicate and generally lighter in color.

There are two patron saints in the church — St. Stephen and St. George.

Inside the church, there is a catacomb saint, remains of a human being that was brought here. In the age of reformation, many relics were destroyed. So the church requests the pope for a relic to make the church more powerful.

Despite its age, the organ still works and is player

We then proceed to go inside the monastery and walk up the staircase.

Check out the painted ceilings. 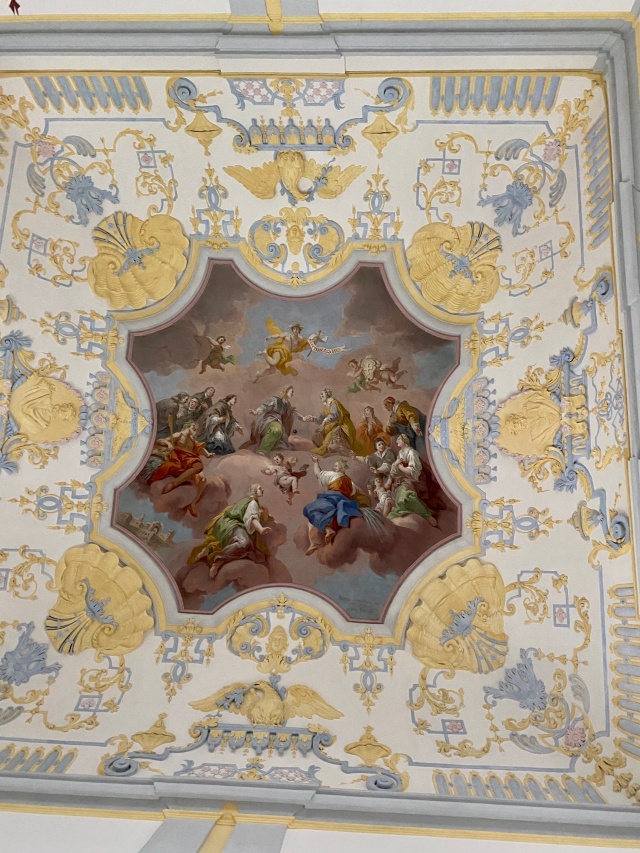 These were heaters in the monastery to keep the place warm.

This painting is view of the Monastery before the Baroque building. In the background, you see the alps. The medieval abbey featured farmyard, the church and an array of separate buildings surrounded by massive walls. 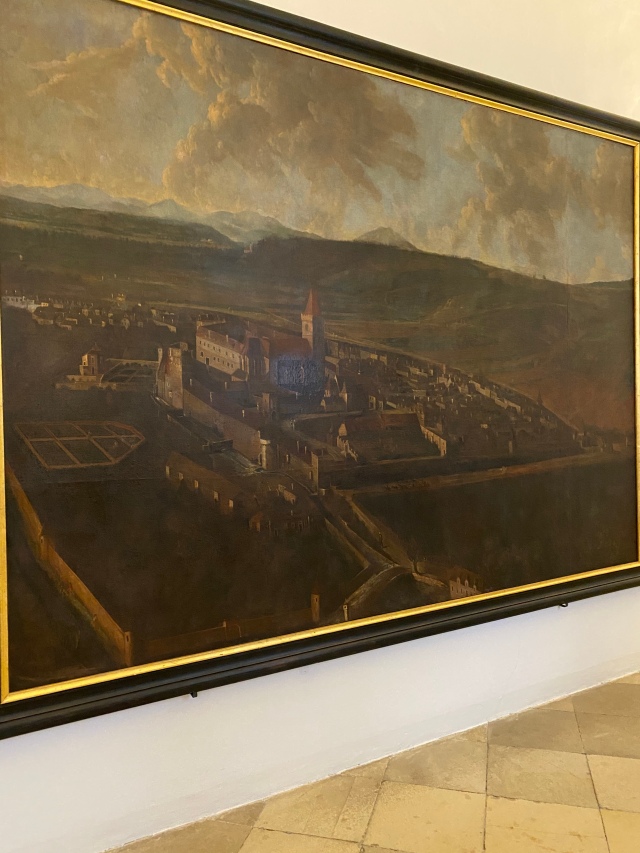 The second painting is much more structured.

We enter the big room and we see how opulent and impressive monasteries can be. Many monasteries were land owners and need to display their power and authority. It was not the time to be humble, and each room was decorated as such, with marbled floors and painted ceilings. 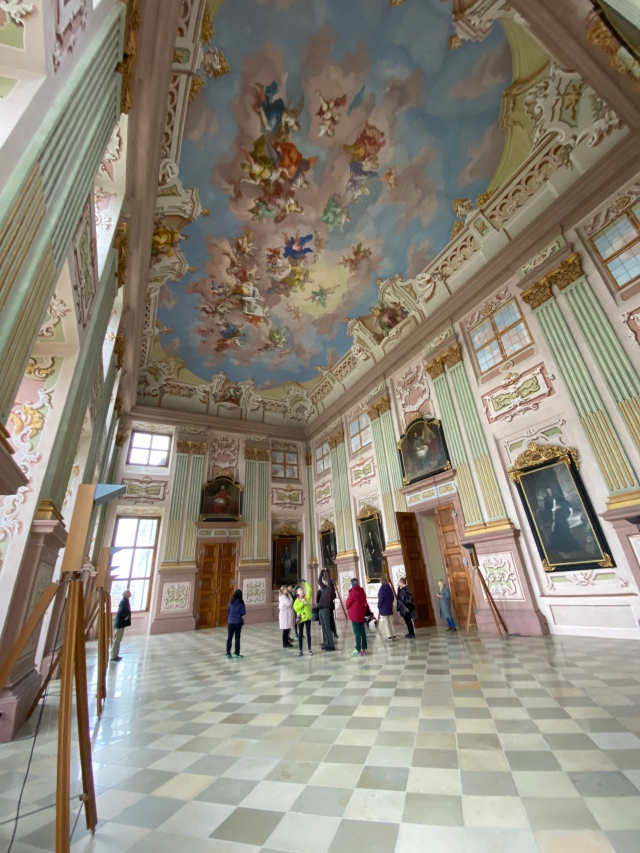 St. Augustine and his History

St. Agustine was born in the Roman Empire in Algeria, born to a rich family. Augustine was always searching for meaning with his life. Finally, he decicated himself to search for God.

In this painting, Augustine walks onshore and sees a boy, who was trying to bail out the ocean into a sand pit. Augustine realized that it was the same as his search for God where He’s trying to grasp God with his own limited mind.

The rule of St. Augustine is one of the oldest compilation for clerics.

This crucifix is called the mystic cross. What’s different about this crucifix is that it shows Jesus Christ’s pain and suffering. Most other crosses depict Jesus usually looking majestic. But here, we see a weak and suffering Jesus who sacrificed for us.

We now enter the quiet chapel straight down the hall.

Where we seat is where the canons meet and pray 3x a day. Joining this community, there are several stages starting as a Novice to see if you can fit this society.

Afterwards, you become a Profes. You can quit but it’s hard. The canons who live here have no private fortune. You can donate it or pass it to your relatives.

However, the canons here though get a salary which goes to a communal bank account and they get an allowance. The allowance can be used to finance their daily expenses

This is the private chapel and the canons gather here to pray. It’s also heated. The church is dedicated to the Virgin Mary. The painting shows the archangel Gabriel approaching the Virgin Mary.

The scenes from the ceiling shows the life of the Virgin Mary.

The next room contains the robes and items of the priest.

A big difference is that the Catholics believe that Christ is present in the consecrated host and drink. Protestants believe it’s just a symbolism.

The next room is the library, holding 16,000 to 17,000 historical books. Books in this library vary, composing of theological books, law, history, science and arts. 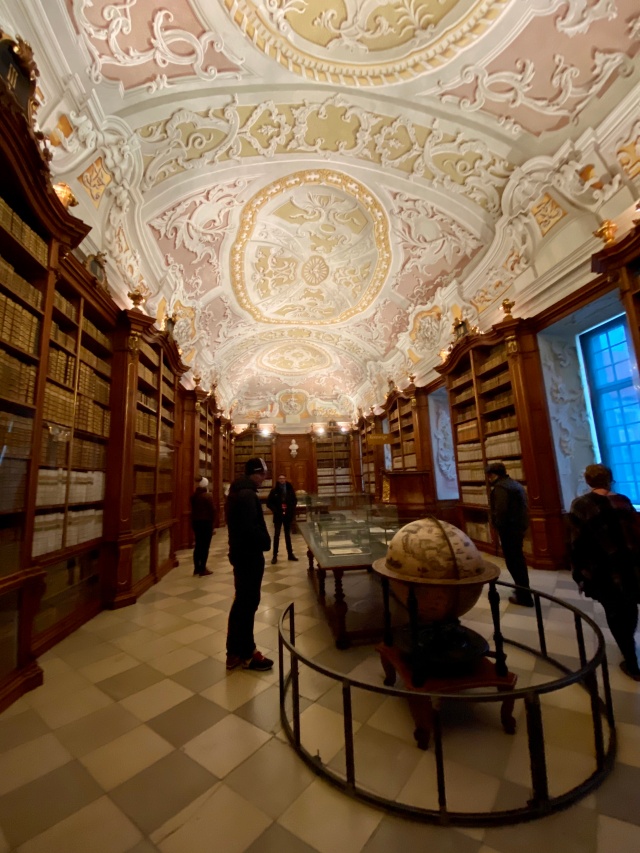 These libraries are treasures for all kinds of goods including letters to Martin Luther.

Down the stairs, we see a big lego model of the monastery. Pretty cool!

The area only makes white wine and we are greered by Johann, who is n charge of the winery.

We go down the wine cellar which is shaped like a cross. It’s more similar to the Baroque style. This cellar was erected in 1800, the same person who designed the alley. 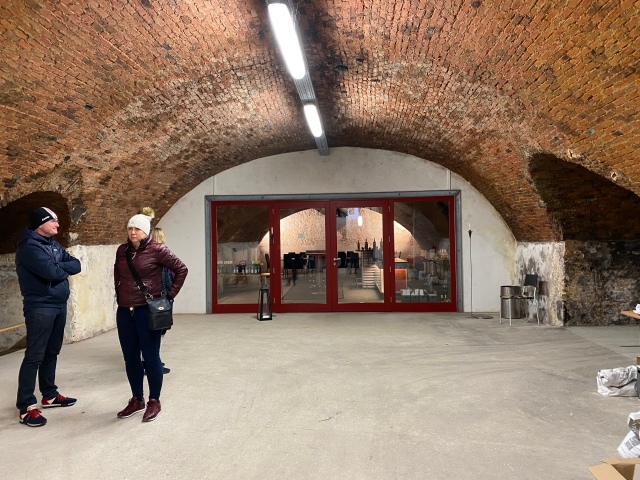 The cellar was created before the monastery. He used this to prove his capabilities as a builder. All the bricks were made inhouse.

Monasteries always owned vineyards. It was an important source of income for them. The abbey employed their own cellar master. The cellar also processed vinegar, as hygienical standards were really high.

The winery — wineyard, cellar and a processing facility — was then rented to a local family. The couple after they reached their 80s returned it and another family, the Schillings, rented it and is operating it today.

A lot of money was invested to produce wine that passes international standards.

The winery produces white wine exclusively. There are four types and we start with the lightest variant. This wine is used during service and is considered a sacramental wine.

Did you notice anything about the labels? 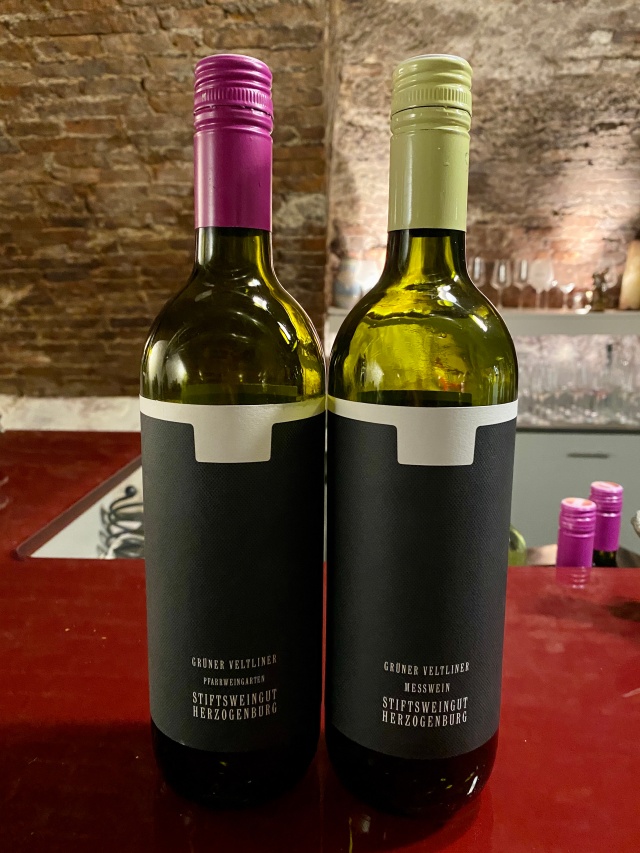 You guessed right, they looked like priest’s robes, signalling they were made in here.

We were given four different types of wine, all of them white.

The first was fruity and crispy. The second has more body and is more peppery. And the third one is a bit more sour.

The last one is 2017, 13% alcohol white wine. Nois burgois uses large grapes and sucks up all the rain water. The grapes almost explodes and outgrow the grapes losing the entire batch. 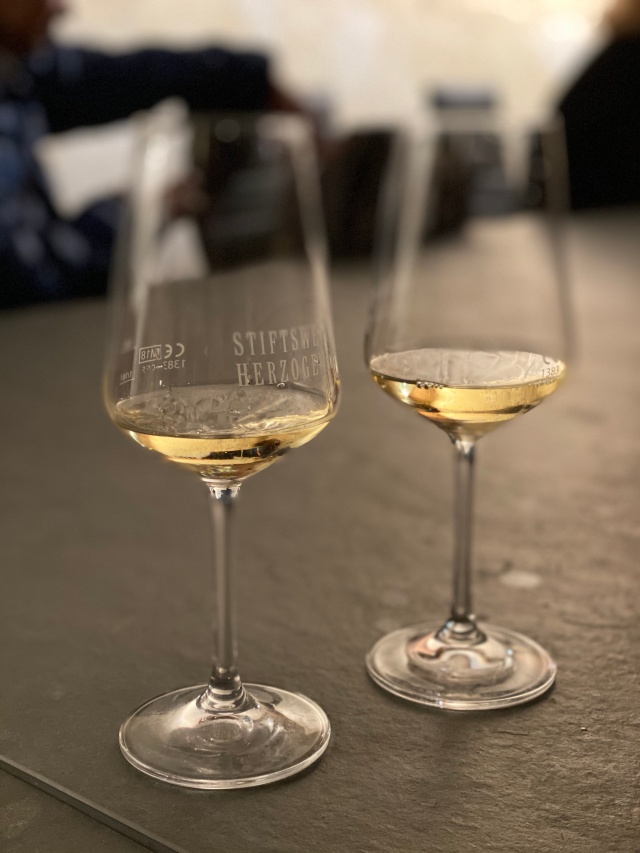 And that ends our monastery and wine tasting tour. My face is red, and we’re ready for lunch.

Afterwards, it would be great to soak in the boat jacuzzi to relax.

www.TinainManila.com Thank you for subscribing and commenting if you like what you read. ❤
View all posts by Tina in Manila →
This entry was posted in children, Europe Trip, Family, Kiddie Activities, Motherhood, Parenting, Tours and Travels, Travels, vacation and tagged church, europe, family vacation, monastery, tour, travel, trip, vacation, wine tasting, winery. Bookmark the permalink.