When asked what was a must-eat place in Hong Kong, many Filipinos recommended Yum Cha. Which is why we ventured to Yum Cha Tsim Sha Tsui. It’s merely just a 5 minute walk away from Exit A2 in TST MRT station.

The entire building is cute down from the interiors to the elevator. Yum Cha is starting to look very promising:

We were welcomed by the big Yum Cha outside the elevator lobby. Now, we’re getting excited!

The interior was simple but cute. We arrived at 8pm so there were tons of seats available. No waiting time.

They handed us a menu and all you had to do was to pick the dishes by yourself. It was a bit confusing at first but thank goodness for the pictures: 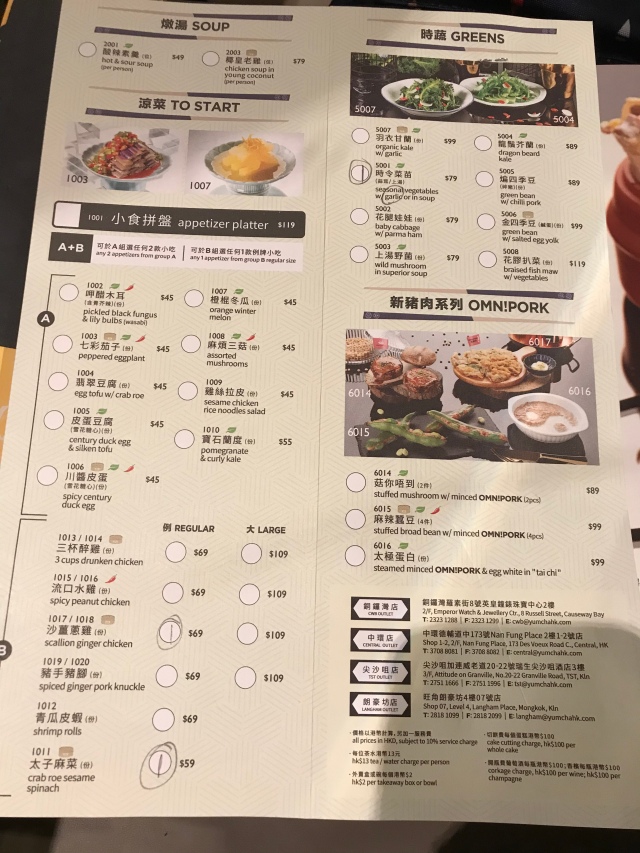 Let me tell you the truth, service is bad.

Nobody paid attention to us or gave any recommendations when ordering. They ignored us until we called them twice to take our order.

The dishes were cooked fast but when they arrived, the waitress carelessly placed the dishes on yhe side of the table. There is also no service water so either you thirst, or order drinks which cost around HKD 25 each.

But we are not here for the good service. This is Hong Kong. Service is more or less the same. We are here for the food.

So how is the food?

Honestly, underwhelming for the price.

Do you know the feeling when you taste something that tasted okay, it’s nice but there’s something missing that it makes it unspectacular? It’s like going to a famed Michelin star restaurant that’s master franchised in Manila, and then realizing something’s not right so it underwhelms.

It’s the same feeling I have about Kam’s restaurant in Manila — acceptable but does not blow my mind away. As expensive too!

Here were the things we ordered: 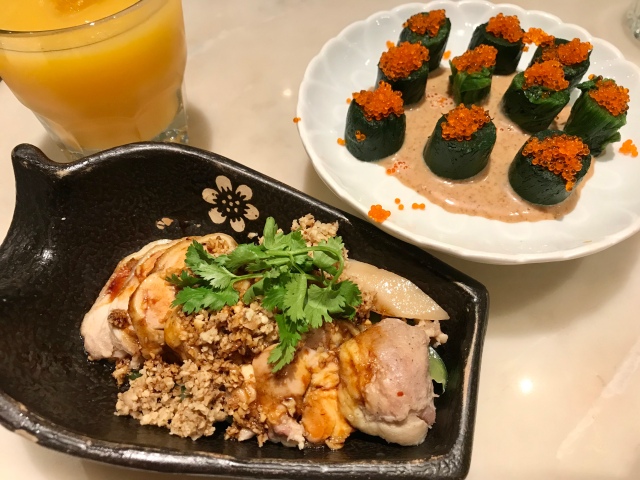 The chicken was a bit dry. It should be soft and smooth to taste but it feels rushed.

The crab roe spinach is the saving grace of the restaurant. It’s good and a must order. Actually, it’s one of the few good dishes of Yum Cha.

Another winning dish. Ask the waitress for their soy sauce. Their st sauce is delicious and deserves special mention. Dip the veggie onto the sweet soy sauce before eating. Yummy!

Sure, they look cute but how’s the taste?

The BBQ Pork Bun is not good at all. It does not contain a lot of filling. Chowking serves better, meatier siopaos. Skip.

The custard bun is nice. The cream overflows and has the right texture. Can reorder again.

I can feel the volume of shrimp in it but it’s a little dry. Mostly mass and that’s it. Not that juicy. There are better shrimp dumplings at home like in China Blue and Summer Palace. Skip! 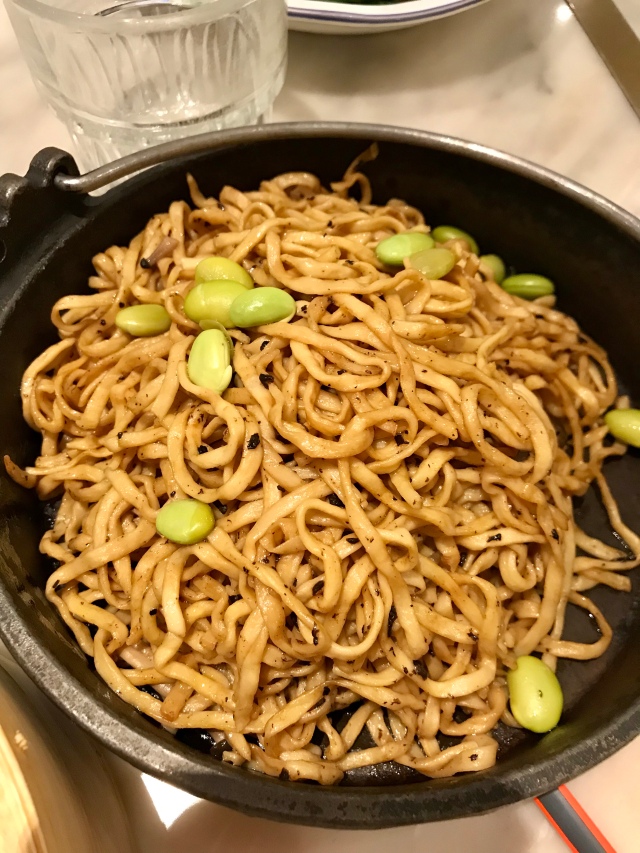 Yes, you can taste the truffle but it’s dry and has a small serving. It looks bigger on the menu. The E-Fu Noodles of Summer Palace and East Ocean are miles better. Skip!

Not a lot of filling and slightly bland to taste. The rice they were talking about are crispies or pinipig. The dish does not have a lot of laman. Actually, there’s nothing special about the dish, so skip!

For dessert, we got the watermelon jelly (HKD39). 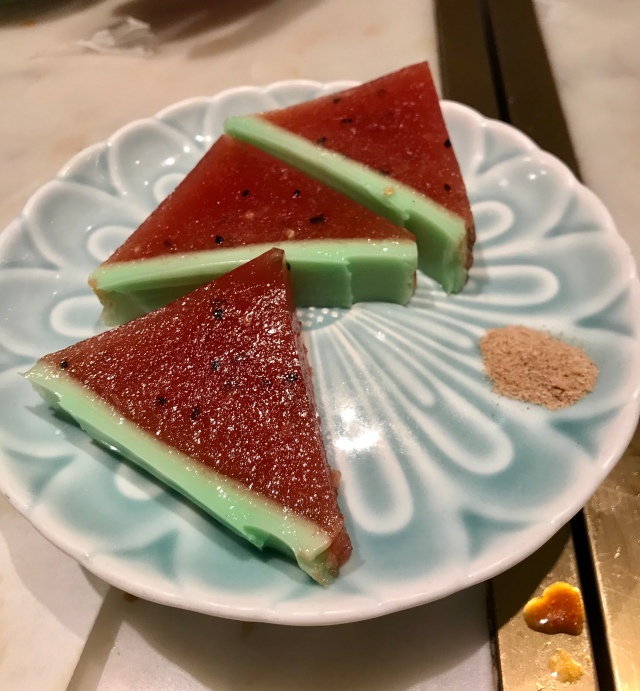 Looks ingenious but the real watermelon tastes better. The plum powder will fit any fruit, so stack up. Skip!

There was only 3 adults on the table and the portions were small so we finished everything. It is yum cha after all. However, our bill came out as HKD 768.90 converted to php5,171.70.

Whoever said this restaurant is a must visit is overreaching the truth. While the dishes may look cute and different, there are far better restaurants in Hong Kong for that price.

Sure, it may seem a lot and we were full after our meal. But to be honest, none of us three came out satiated with our meal. None of us said, “Wow, that was a good meal.”

My mom thought it should have cost less than it did. And even then, it was still expensive for what you grt.

My hubby loved a few dishes but none really was a blow your mind dish, although the spinach crab roe and vegetables made the cut.

Personally, I don’t know why people would fawn about this restaurant this much. Yes, it’s good but not super good for Hong Kong standards. Plus, it’s expensive for what you get. For that price, just go elsewhere.

Plus, service was fast but bad. People were not very polite and everyone pretty much ignored you.

In the end, we are glad to try but it’s not a restaurant we would really go back to unless invited by friends for a gatherine. I hope people would be more honest with their restaurant reviews though as to not mislead others.

We rate Yum Cha as an OK. OK to visit but not a place that you really must go to when visiting Hong Kong.

www.TinainManila.com Thank you for subscribing and commenting if you like what you read. ❤
View all posts by Tina in Manila →
This entry was posted in First Experiences, Food, Not Recommended, Personal opinion, Restaurant reviews, Tours and Travels, vacation and tagged being honest, dimsum, dinner, foodie, honest, Hong Kong, noodles, Not Recommended, restaurant review, yum cha, yum cha hong kong. Bookmark the permalink.