We met via e-Harmony.

Yes, our love story is a testimony that online dating works, and works beautifully.

I was single, 33 years old, and fresh out of a breakup from a 2.5 year old relationship that blindsided me.

He was 36, a notorious playboy over the last decade, and has been searching fruitlessly for love that would his parents would approve.

I found a sponsored article that asked whether someone was The One for you. The article had many points that provided some clarity on my brother’s relationship problems, and alongside this article was a “REGISTER FOR FREE” ad for e-Harmony.

Thinking I had nothing to lose, I signed up for the experience.

What’s great about the site was that it was anonymous, and it asked you to answer a personality test that allowed the system to match you to someone that fits your personality. 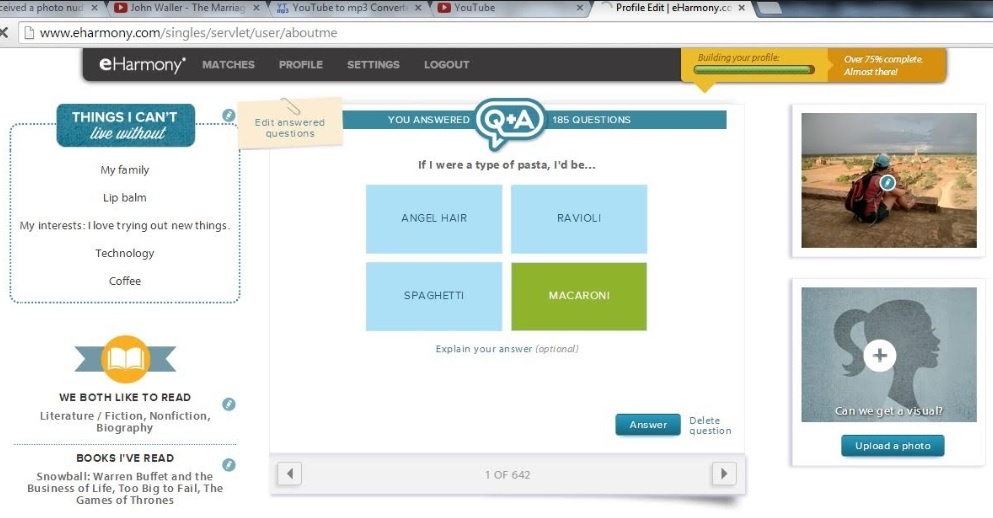 According to eHarmony, “eharmony is the first service within the online dating industry to use a scientific approach to matching highly compatible singles. eharmony’s matching is based on using its 29 DIMENSIONS® model to match couples based on features of compatibility found in thousands of successful relationships.”

Unlike other sites, it only showed your profile to your matches. You can state your preference on the type of person you liked. It was nice that the only thing others can see was my name.

I cited I wanted someone who was tall, was a Christian, Chinese and from Hongkong, Philippines or Singapore. I figured it was an interesting concept and was worth a try.

Little did I know, my future husband was signing up as well.

His sister was able to successfully find love online as well, so he thought he’d want to give it a try.

My future husband wanted someone who was a Christian, a non-smoker, Chinese and lived 20 kilometers from his house.

I was okay with meeting men from all over as I lived in Hong Kong, Singapore, Taiwan and the United Kingdom.

Given his location preference, I was one of his two matches from the site.

I on the other hand had around 90+ eligible men to choose from! Wohoo! 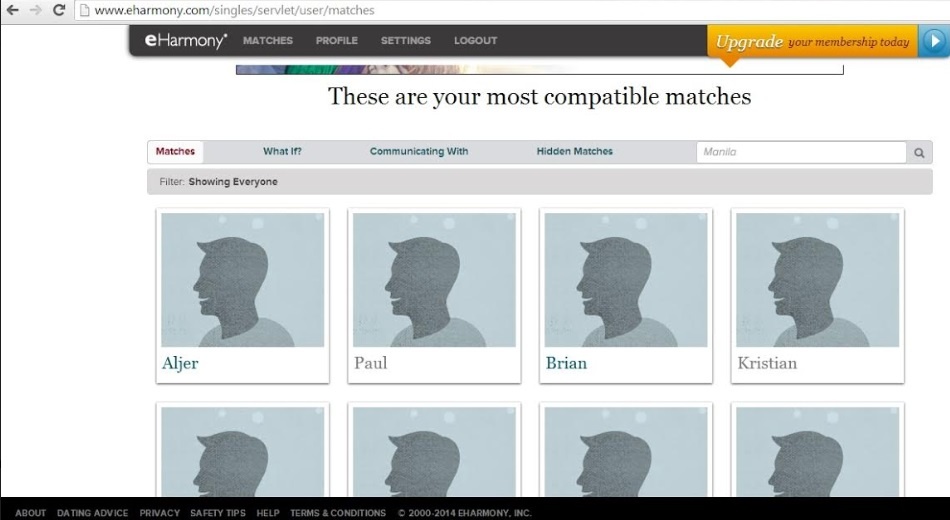 The less picky you are, the more matches you will have!

As I was the better looking one out of his only two matches, my now husband sent me a nudge and requested to see my photo: 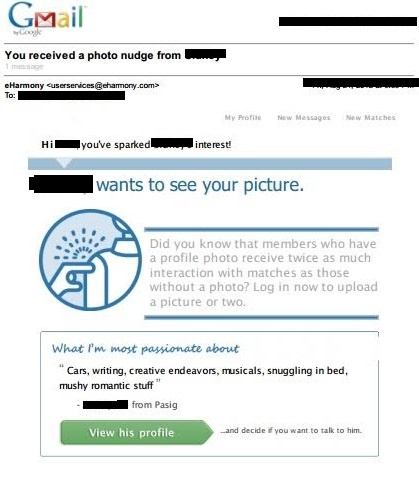 eHarmony sent the notice straight to my mailbox. It was August 2012.

What initially attracted me was his honesty.

Husband was very honest, very direct, and oftentimes, tactless. He doesn’t really lie and would tell the truth if you ask for it. There is no sugar coating with him. Black is black and if politeness indicates that he is to say white, he would still say it is black.

His unfiltered mess both attracts and repels depending on who you talk to, and yet, I found it quite refreshing.

From the get go, he was open about his first failed marriage, and that the annulment was clean and there was no way they were getting back together. He has no bad words about his ex-wife, only citing they remained friends and in civil terms.

We exchanged tons of messages, never really talking about anything confidential but open about educational and family background, our interests, and what we do.

We had common friends but didn’t know it yet.

The only thing I knew was that this guy was different, quite intelligent, and very interesting.

I looked forward to reading his emails and learning more about him.

From the initial emails, I learned where he went to school (it was my mother’s school), graduated with a degree in Engineering in one of Manila’s better schools, and his family went to a Christian church.

In truth, I think that maybe it is God’s plan to let us meet each other this way.

If I met my husband in a car show, I would have found him too strong, too confident and too in-your-face. As we only had words to rely on, we got to know each other better from a non-physical standpoint.

When my husband said he liked me for my brains, it was because of weeks of emailing each other back and forth.

Here was the catch —- to exchange messages, each of us had to pay USD 63.00 for a 3-month subscription.

Intrigued, we both gladly paid the USD 63.00 from each of our sides. This is how eHarmony makes money, ladies and gentlemen.

After a month of emailing and then texting, we finally met up.

Our first date was in this casual steak place in Pasig and we talked for hours. Unlike my dates with other men when I felt like an amused observer, time with my now husband went by quite fast.

I don’t really know what we talked about really, but most likely it’s about our college days and my times abroad, and for him working for the family business and his first marriage.

On our second date, I met his sister and her husband, both expats from Shanghai. At that time, coincidentally, they came by in Manila for a visit.

In between dates, we texted and talked to each other on the phone.

I enjoyed talking to him.

We had the same wavelength and can discuss multiple topics from American gossip, to politics, to car shows to wall climbing and keeping fit.

In November 2012, we became a couple. On June 2014, we got married, and have been happily married ever since. 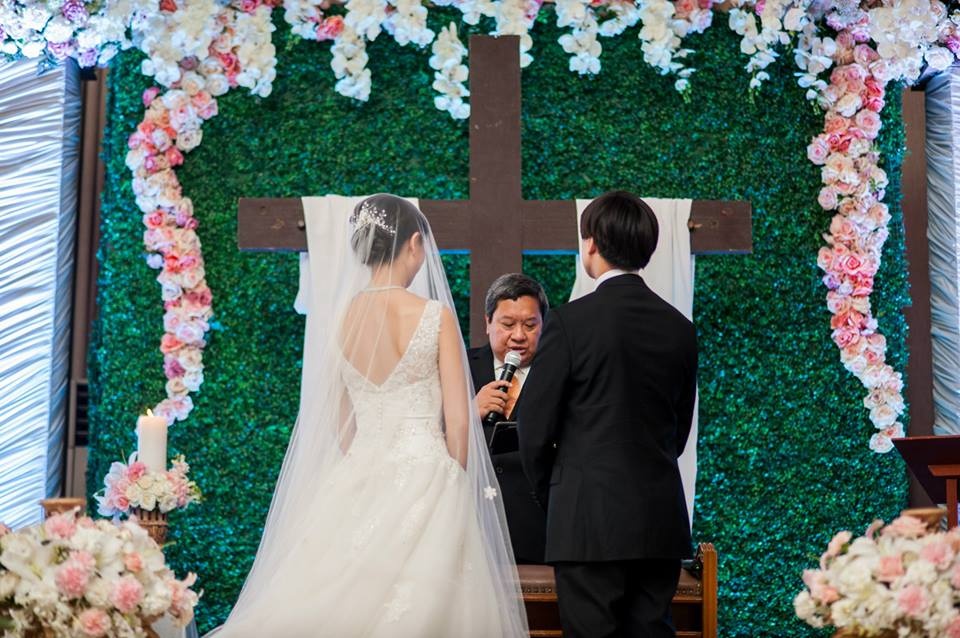 We have a daughter who is almost 3 who is the light of our lives.

Since then, I have been a fierce endorser of online dating.

We both think it’s an incredible discovery, and it’s the best USD 63.00 we’ve ever spent.

Who knew we would meet each other via an American dating app? Who knew that while we had mutual friends, it was this app that brought us together.

So if you’re single and looking for love, never lose hope.

2 thoughts on “How I Met my Husband”